Chapel and its Windows

The Ina Ellen Chapel was built in 1974. The Chapel allows a more intimate worship space and is air conditioned, features a small pipe organ, and seats 60. The beautiful stained glass windows (see below) allow the worship space to radiate with colored light. 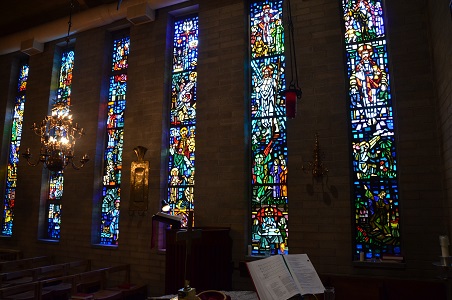 The windows, designed for St. John’s Chapel by the Willet Studios, are created in a very interesting way. Brilliantly colored glass, usually an inch in thickness, are cut to the desired size. The inner surface of certain pieces is then chipped for faceted conchoidally to enhance the design and add a jewel like quality. It is the thickness of the glass assures the breath-taking radiance and complete purity of color.

The secrets of making colored glass were known to the ancient Egyptians who used them as mosaics to enhance their palaces and temples. The beauty of the stained glass in medieval cathedrals is legend. It was not until our present age that the concrete and epoxies could be developed to form a structural unit of great strength. This medium adapts to the smallest openings or to the entire wall surfaces of heroic proportions. In small windows close to the eye, such as those in St. John’s Chapel, the details are very small.

The iconography of the nave aisle windows have been planned to begin at the rear of the church on the epistle side with the Creation and end with the window opposite on the gospel side with Revelation.

1. Creation
At the top of the window is a triangle, enclosed in a circle. This illustrates the one and triune God, Father, Son and Holy Spirit. From this symbol downward are the created works of God as enumerated in the book of Genesis: The light separating from dark, the waters over the firmament, the sun, moon, fish, animals and finally man and woman at the bottom.

2. Works of Man
The works of man begin at the bottom with the erupting of volcanoes from which man discovered fire and harnessed it for his use. Next are the wheel, the lever, and the plumb line enabling man to build. He constructs the pyramids and the Parthenon. His works of art are typified by the Discus Thrower of Myron. From the crude well bucket making use of a pulley the Roman aqueduct evolves, enabling man to irrigate the land and make it fertile. The chemical retort, the telescope and the printing press further increases man’s knowledge. Sea travel is symbolized by Noah’s Ark, the Viking ship, and the compass. Leaving the kingdom of earth and water, man enters the air, first by means of a balloon, than an airplane and finally outer space is broached by the rocket and satellite. At the top of all is the atomic symbol encircling the globe of the world.

3. Old Testament – Law and Covenant
At the top of the window, God’s covenant with man is illustrated using the symbol of the rainbow. The Ark is grounded as the floodwaters recede. Noah and his family built an altar to thank God for their deliverance. Suddenly the rainbow appears and God promises never again to wipe mankind from the face of the earth with a flood.
God next promised Abraham that his seed should multiply to be as numerous as the stars in the sky. When Abraham attempted to sacrifice his beloved son Isaac in obedience to what he thought was God’s will an angel stays the knife.
Moses, who would grow to be the leader of Israel, is seen as a child in the basket among the rushes. He receives the Law atop Mt. Sinai. He leads the children of Israel through the wilderness for forty years.
At the bottom is David the shepherd boy with his harp. He authors the Psalms. The twenty-third is symbolized by the still waters, the well-prepared table, and the house of the Lord (towers resembling a church).

4. Old Testament – The Prophets
The story of the Old Testament continues at the top of the next window with King Solomon, David’s son, admiring the completed Temple.
Next, the angel seals Isaiah’s lips with a coal from the altar of sacrifice so that he may prophesy the coming Messiah, shown as an infant.
Below is Amos with his symbols the plumb line and the basket of summer fruit.
Then Jonah is cast out of the mouth of the whale.
At the bottom, Elijah ascends to heaven in a flaming chariot dropping his mantle to Elisha.

5. The Nativity
At the top, under the star of Bethlehem, an angel gives the good news to the Shepherds who are keeping watch over their sheep.
Next is the Holy Family, Mary and Joseph, guarding the Child in the manger.
The Epiphany, the showing of Christ to the Gentiles, is represented by the three Kings bringing their gifts of gold, incense, and myrrh.
At the bottom of the window St. John’s Evangelical, Lutheran Church appears surrounded with an evergreen wreath and Christmas trees.

6. Baptism
Jesus at the age 12 is depicted near the top of window amidst the scholars in the temple.
Below John the Baptist is standing on the banks of the Jordan holding his staff cross. This is predicting the death which Jesus faced.
Next Christ is shown standing on the world for he came as a Savior for all people.
The scene at the bottom shows Jesus blessing the children and welcoming them and welcoming them with open arms.
The Holy Spirit symbolized by the dove, is atop the window blessing all of Jesus’ earthly ministry.

7. The Lord’s Supper
At the top of the window, Jesus makes his triumphal entry into Jerusalem amid the crowd’s hosannas.
Next, Jesus holds the chalice while Judas, at the bottom, approaches with the guards to apprehend him. (Note the positioning of the iconography enables the two Sacraments, Baptism and Communion, to flank the altar.)

8. Resurrection
At the top of the window Christ is shown ascending into heaven watched by His Apostles gathered below. Christ rising victorious from the tomb dominates the window. Immediately below, the angel appears to the women who came to the tomb with spices.
At the bottom is one of Christ’s post-Resurrection appearances; the two Disciples in the breaking of bread. (It will be seen that the Easter window is opposite Christmas, pairing the Church’s two principal feasts.)

9. The Church – Pentecost – AD 750
Pentecost is sometimes called the birthday of the Church. Here in a small scene at the bottom of the window are the faithful gathering together in an upper room while the flames of the Holy Spirit appear over their heads.
Next are Peter and Paul, the two strongest of the leaders that guided the infant Church.
Above, Constantine, who was the first ruler to establish Christianity, presides at the Council of Nicaea listening to Athanasius, who established for all time the doctrine of Trinity.
Once when St. Augustine was walking by the sea he saw a child trying to fill a hole in the sand by pouring water into it. The saint remarked that to complete that task was impossible. “Not so impossible as to solve the mystery of the Trinity” was the reply.
Nest, St. Boniface is chopping down the pagan’s sacred oak tree. When he was not struck by lightning, he succeeded in converting a large part of Germany.
At the top, Charlemagne is seated under the descending dove of the Holy Spirit which guides the Church for all time.

10. The Church – AD 750 to AD 1500
Church history is continued with the Scandinavian heritage of the Lutheran Church. At the bottom is Saint Ansgar, a young monk who led missions to Sweden and Denmark. He became the first archbishop of Hamburg. A Viking ship is seen behind him. Above him is a Swedish country church with corbeled gables. The church above is the Cathedral at Lund, Sweden. It dates from the 1080’s. Around 1100, it was the seat of the archbishop, primate over the whole of the North.
Near the cathedral is St. Francis of Assisi. He typifies the best of the age of Monasticism. He is shown with animals and birds, for he regarded all creatures as his brothers. Shown seated under an arch is St. Bridget of Sweden. Bridget or Britta planned the rule an office of the order she was called to found but which she never saw in existence. Next to Bridget is Meinhard, a monk from Holstein, who landed in 1180 on what is now the Latvian coast and for sixteen years preached Christianity to the Livs. The Lom Church is representative if the Norwegian stave churches. Most of these were built in the twelfth century. At the top are Hus and Tyndale, martyrs of the Reformation. Hus, a leader of Czech reform is shown being burned at the stake. Tyndale issued the first English translation of the Bible in 1526. At the top is the Bible with chains breaking, symbolizing its growing availability for people to read.

11. The Church – AD 1500 to AD 1969
In 1534, Luther completed his bible translation begun in Wartburg. He defied papal authority, symbolized by crossed keys, in 1521 at the Diet of Worms with the words, “Here I stand, I cannot do otherwise.”
King Gustavus Adolphus rides victorious at the head of his army bearing the Swedish flag. In 1632, he ordered his chaplain to hold a thanksgiving service in St. Ann’s Church, Augsburg, thus establishing Protestant-ism there.
In 1638, the Swedes established their colony on Delaware, calling it New Sweden. The first Lutheran pastor in America Reorus Torkillus, is shown preaching to the Indians. The little church above the Swedish ship is the birthplace of the Augustana synod in Jefferson Prairie, Clinton, Wisconsin. In 1860, Augustana College and Seminary is next above. St. John’s Church, Stamford, established in 1891 is shown being moved from its first location at St. John’s Place to Grove Street. Archbishop Nathan Soderblom is included because of his leadership in early years of the ecumenical movement. Behind him is his cathedral at Upsala. The Vatican Council is shown by the Pope’s throne surrounded with mitre and cardinal hats. Rising victorious above the clouds of war is the Ecumenical seal with St. John’s Church in its center.