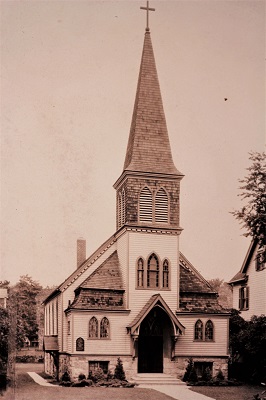 The roots of St. John’s Lutheran Church go back to Swedish immigrants in the Midwest where, in the 1860s, forty-nine Swedish Lutheran churches joined together to form a body called the Augustana Synod. In the 1880s and 1890s, there was a large surge of immigrants from Sweden, some of whom came to Stamford. The earliest known Augustana congregation in this area was in Bridgeport (1885). Their pastor traveled to Stamford to hold worship services. The St. Johannes Society was organized in 1889 and met in local churches. On September 11, 1891, St. John’s Evangelical Lutheran Church was officially organized as a mission congregation of the Augustana Synod with twenty-six members.

In 1892, land was purchased on St. John’s Place. The cornerstone was laid on January 1, 1894, and dedication of the building was on December 12, 1897. A pipe organ was installed in 1906; half of the $581 total cost was donated by Andrew Carnegie. Throughout the years, St. John’s has been blessed to have many talented organists/directors of worship.

In 1923, the land under the building was sold and the church was moved across Main Street on blocks and rollers drawn by horses to a plot on Grove Street, three blocks away. A sacristy and Council Room were added and a basement was built. There were 195 communicants and 65 children. In these early years, the congregation was served by many pastors, all for short periods of time. The Swedish language was used exclusively for at least 25 years, but eventually English was spoken every other Sunday. Until the 1940s there was one Swedish service a month.

In 1925 Pastor Nore Gustafson accepted a call and served until 1944. During his tenure, membership increased to 353 communicants and 71 children, and St. John’s became self-supporting, no longer requiring mission aid from the Synod.

In 1944, Pastor Bernhard Johnson was installed and he served until 1981. Property was purchased on Newfield Avenue and our present sanctuary was dedicated in September 1954. The three steeple bells were custom cast in Ystad, Sweden, as a nod to the congregation’s Swedish heritage. St. John’s made the news at this time when the Grove Street building was sold to the new Jewish Reform congregation Temple Sinai. For seven months the two congregations shared the building until the Newfield Avenue building was finished. This joint occupancy was so unusual that it was reported in the New York Herald Tribune with pictures of the church and the clergymen. The portrait of Christ at Gethsemane (currently in our chapel) was covered on Friday for temple service and uncovered on Sunday for the Lutherans. The two congregations developed long standing mutual friendship and respect. When Temple Sinai moved to their own new temple they sold the building to the Roman Catholic Diocese of Bridgeport, and it became the parish of Our Lady of Monserrat. The land was sold to Stamford developers in 1986 and the building was demolished after a joint service of remembrance shared by all three religious bodies. 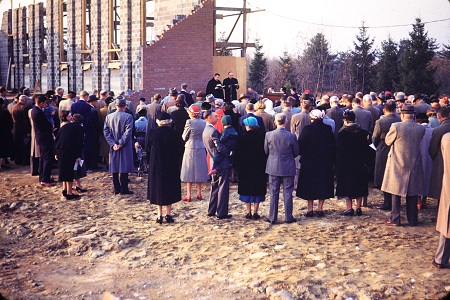 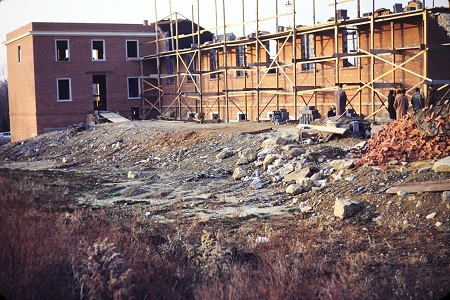 In 1958, an education and parish hall wing was added to the Newfield building. This building also houses the Gray Farms Nursery School, established in 1954 with a mission to serve both church and community. In 1974, the Ina-Ellen chapel was dedicated. This chapel was donated by member Roy W. Johnson in memory of his wife, for whom it was named. The altar is a large millstone from New Hampshire, her birthplace. There are many Swedish furnishings – the brass chandeliers are the same as those found in churches all over Sweden. The model sailing ship hanging from the ceiling is called a votive ship. As long as 1000 years ago, these were hung by Christians in their churches, especially in the port cities of what became the Lutheran countries of Scandinavia and the Baltic. It was considered a way of assuring a safe voyage for the ship and its crew.

In 1981, Pastor Dennis Albrecht began his ministry. In celebration of the 100th anniversary of our founding, a Heritage Fund was established in 1981. This was a challenge fund: for every dollar donated to a special fund for renewal of the physical property, two dollars (to a maximum of $200,000) was set aside from the St. John’s Endowment Fund for special outreach. This goal was met and outreach gifts were made to a variety of service organization including Bethpage Mission and The Lutheran Theological Seminary at Philadelphia, as well as many local organization dealing with mental illness, hospice care, counseling, care of the homeless, drug abuse and prison visitation.

Throughout the history of the congregation, there have been many active organizations: Sunday School, Junior and Senior Choirs, men’s and women’s groups and youth ministry. In the early years many of their activities were fund raising meatball dinners and smorgasbords, fairs, Christmas tree sales, etc., but the emphasis today is on worship, Bible study, fellowship and service projects.

In 1993, a memorial garden named The Courtyard, was established next to the chapel. The Courtyard Memorial Garden affords an opportunity for members to memorialize loved ones by interring ashes with a bronze plaque installed on the surface of the terrace or through a remembrance plaque on the exterior of the Chapel wall.

In 1995 a custom-crafted Richards Fowkes tracker organ was installed in the main sanctuary. The tonal design was inspired by 17th and 18th century organs of northern Europe. It has 2419 pipes, divided into 49 ranks. In 1982, the Joyful Noise program was established to bring musical and theatrical performances to the community. It is the longest running church concert series in Stamford. Dr. Stephen Rapp was the Director of Music from 1992 to 2016. 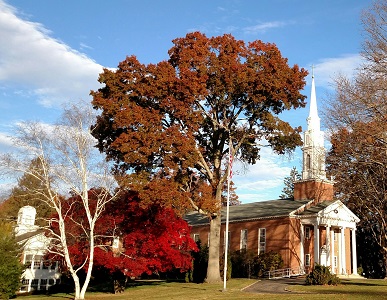 In 1997, Pastor Albrecht retired and Rev. Dr. Scott Harris was called. He served until 2012, and Pastor Will Kroeze served as Associate Pastor from 2008 to 2014. The congregation became involved in many new service projects – Thanksgiving Baskets, Christmas Wish Lists for Family Services, monthly dinners at Pacific House, Kids’ Dance for those with special needs, Midnight Run to the homeless in New York City, and sewing approximately 75 quilts annually for Lutheran World Relief.

The summer of 2017, Gray Farms Nursery School departed St. John’s after over 60 years as a learning center for children. St. John’s entered into a partnership with Concordia College-Bronxville, New York, to establish the Concordia Music Conservatory – Stamford. After extensive renovation of the Education Wing to create music studios and a refurbishing of Luther Hall, the Concordia Music Conservatory began music instruction for students of all ages on February 1, 2018. In addition, work on the church facility in 2017 and 2018 resulted in the reroofing of the sanctuary, installation of solar panels on the sanctuary and Luther Hall roofs, and the air-conditioning of the sanctuary.

The pandemic of 2020 resulted in closing the church facility in mid-March; and with the exception of a few outdoor summer services and two months in the fall, no worship or activities were held at the church for nearly a year and a half. Worship was recorded, edited, and made available online with over 20 congregations viewing the worship of St. John’s. In December, St. John’s began livestreaming worship. The media platform Zoom enabled the congregation to “meet” for Sunday virtual coffee hour, Sunday School lessons for kids with the pastor, Adult Forum, weekly seniors meeting, youth group, Confirmation classes, and meetings for Committees, task forces, and Council. A special Memorial Day service was posted online for families who were unable to hold funerals for friends and loved ones, and special videos honoring high school graduates were made. Members networked via emails, texts, phone calls, and handwritten cards. Shut-ins were matched with members for regular contacts, and volunteers ran errands and obtained groceries for those who were high risk and “sheltering in place.”  When the congregation returned to “in person” worship the spring of 2021, COVID 19 protocols were strictly followed – facemask wearing, social distancing, sanitizing high touch surfaces, no wine at Communion, attendance preregistration, etc. Protocols gradually relaxed when a significant number of people were vaccinated and health guidelines permitted gathering. The congregation discovered that the church is truly not the building; the church is the people of God and weathered the pandemic well given the challenging circumstances.  Worship and mission continued throughout the unprecedented, worldwide health crisis.

In May of 2021, Zion Lutheran Church of Stamford disbanded after over a hundred years of faithful worship and ministry. The majority of its membership transferred to St. John’s and the congregation was blessed with their faithfulness.

While St. John’s has always been outwardly focused to live out the gospel in our community and beyond, a few new mission ventures were pursued in 2021 and 2022.  The congregation established The Little Free Pantry, a stand-alone structure where persons in food insecurity can help themselves to groceries/toiletries 24 hours a day.  St. John’s also become part of an Interfaith Social Ministry Collaborative of ten faith communities that identify and used combined resources to address specific needs, resulting in assisting with the resettlement of two families from Afghanistan, Midnight Run and a school backpack program, and volunteering at Building One Community.  The Collaborative continues the strong, intentional ecumenical and interfaith relationships with other congregations that is a hallmark of St. John’s Lutheran Church.