Nave and its Organ 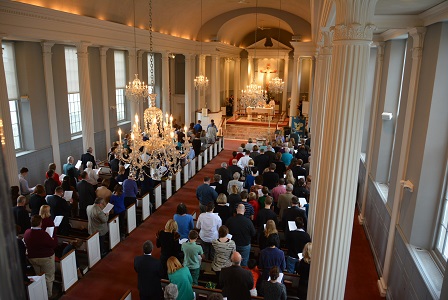 The nave of St. John’s Lutheran Church was built in 1953 in the style of neoclassical architecture with classical columns, moldings and vaulted ceiling. The nave seats over 200 worshipers and features a world-class pipe organ that was installed in the nave in 1995. Go to the very bottom of the page to listen to videos of the organ, including “A Mighty Fortress” improvisation by Bálint Karosi, organist at St. Peter’s in NYC (54th and Lexington Avenue). 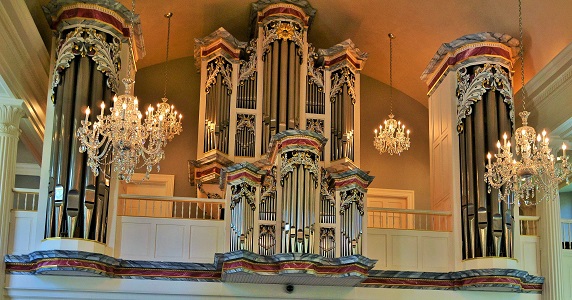 Many believe that the violins created by Antonio Stradivari in the 17th and 18th centuries will never be excelled. So it is with the king of instruments, the pipe organ. During that same period, organs were built whose sound and construction may never be surpassed.

Some of today’s most respected organ builders through research and study are seeking to bring those timeless sounds and superb mechanisms to modern listeners and players. In Chattanooga, Tennessee, Ralph Richards and Bruce Fowkes have brought together a group of talented American and European craftsmen to build organs according to the principles of historic northern European instruments.

Richards, Fowkes & Co. was chosen in October 1992 to create just such an instrument for St. John’s Lutheran Church. The sanctuary’s neoclassical architecture, rectangular shape, and barrel vaulted ceiling offered the builders a setting similar to that of many churches housing great instruments.

A trip to Europe was made in the early stages of the project to study the organs of North German master builder, Arp Schnitger. His instruments are unparalleled for their remarkable ability to lead congregational singing. They are also unrivaled for their colorful sounds to play solo organ music.

The St. John’s instrument took two years to build and assemble before being taken apart, packed and shipped to Stamford for installation in February 1995. Voicing, a process of hammering, cutting and nicking each pipe to create the best possible sound, and tuning were completed shortly before the organ’s dedication in November.

The organ has 2,419 pipes divided into 49 ranks comprising 33 speaking stops. A Zymbelstern (a revolving star which rings bells), and a Vogelgesang (a bird song created by a short pipe blowing into water) are also included. The instrument is playable by direct mechanical key and stop actions on three manuals and pedal.

The pipes, ranging in size from 6 inches to 16 feet in length, were cast of tin, lead, antimony, bismuth and copper, then planed and hammered; two ranks of pipes were made of white oak. All but a few bass pipes are housed in poplar cases. Casework visible in the sanctuary has been painted white, with faux marbre and gilding applied to moldings.

Two cases holding the pedal pipes flank the main (Werk) case, one at each end of the balcony rail. The base of the Werk case contains the keydesk where the organist plays. The “Rückpositiv” is cantilevered from the center of the balcony rail. An undecorated case (Hinterwerk) is inset into the balcony’s rear wall. It is fronted with louvers called “swell shades” which can be opened and closed by the organist to make dynamic gradations.

The keydesk where the organist plays is set into the base of the main case, and made of mahogany with an inlay of bee’s wing satinwood. Manual natural keys are covered with boxwood, the sharp keys with ebony. Pedal keys are made of oak; the sharp keys are darkened by fuming with ammonia.

The winding system is located in a soundproof room behind the balcony. Two single-fold wedged bellows allow a slight degree of flexibility in the organ’s wind supply. Stabilizers may be added when a steadier supply is desired. Poplar wind lines bring pressurized air to windchests made of mahogany.

The blower which feeds the bellows was built in Germany. Pipe shades placed over the tops of the front pipes were hand carved in France to the builder’s specifications. The remaining thousands of parts were made at the shop in Chattanooga. The centuries’ old techniques to do so were produced with the aid of computer drafting and modeling.

In this age of mass production, the 25,000 man-hours required to craft wood and metal into an instrument of tonal and visual beauty is a testament to the builder’s desire to create an instrument for St John’s worthy of praising God for many generations.

“Next to the Word of God music deserves the highest praise. Whether you wish to comfort the sad, to terrify the happy, to encourage the despairing, to humble the proud to calm the passionate, or to appease those full of hate, what more effective means than music could you find?” – Martin Luther